With the next step in Destiny 2’s ever-growing universe only a few weeks away, we felt now was the perfect time to go through one of the biggest changes introduced in the new DLC - the Content Vault. Announced in June alongside the next three expansions, the Destiny Content Vault is Bungie’s attempt at reducing the installation size making Destiny 2 easier to develop going forward.

Entering its fourth year of development, Destiny 2 released in September 2017 and since then four different expansions have made their way into the game: Curse of Osiris, Warmind, Forsaken and the most recent addition Shadowkeep. The next major DLC, which the Destiny Content Vault will release alongside, is Beyond Light. Rather than starting development on Destiny 3, Beyond Light marks a commitment to improving and adding to Destiny 2 with additional expansions planned for 2021 and 2022.

Originally set to launch on September 22nd, Destiny 2 Beyond Light underwent a delay until November 10th. Bungie, much like the rest of the world, had to adapt to the ongoing COVID-19 pandemic, mobilizing its work force and shifting the development of Beyond Light to a remote workspace. This, unfortunately, brought its own challenges, which led Bungie to delay the game until November when it will release on PlayStation 4, Xbox One, PC Via Steam and Google Stadia. The PS5 and Xbox Series S/X will also see enhanced releases later in the year on December 8th.

One of the biggest changes announced for the upcoming DLC is without the doubt the introduction of the Content Vault - a content model that involves Bungie removing older content from the game and keeping it in storage. With over three years of content in Destiny 2, Bungie has been vocal about the difficulties they’ve faced updating the game. Each new expansion brought with it a litany of bugs and issues because of the ever-expanding complexity of the Destiny universe. The Content Vault is Bungie’s attempt to tidy up the game, making future updates quicker and more exciting.

So you’re probably wondering what will happen to the old content? Don’t worry. There’s a high probability that Bungie will bring back a good portion of it in future updates. They have already shown their willingness to bring back fan-favorite content with the reintroduction of the Moon in Shadowkeep and reusing the first mission from the original Destiny for the launch of New Light last year. Bungie has already stated their intent to release Destiny 2 content with slight improvements and tweaks alongside special events or as a focus of a season alongside an old or new activity.

Everything from planets to strikes and even raids are leaving the game on November 10th, and the list of content going into the vault is expansive, so we’re going to focus on Destiny 2 exotics, raids and catalysts in this article.

While only a small portion of the player base takes parts in raids, they still make up a significant part of the Destiny experience. The Leviathan, Eater of Worlds and Spire of the Stars will go into the vault, along with Scourge of Past and Crown of Sorrow. You can view the full list below.

All exotic weapons and catalysts linked to the raids will also go into the vault, making now the perfect time to dip in and complete your collection. The Anarchy in Scourge of the Past and Tarrabah which can be unlocked in Crown of Sorrow will both be available via the Memory Kiosk (more on that shortly). The Anarchy is still considered a solid option for many bosses and encounters because of its ability to damage enemies while you swap to another weapon. If you haven’t yet earned the popular exotic, we recommend you get farming as soon as possible, especially as Bungie has increased the chances of it dropping.

Several exotic quests will enter the vault in November, although you’ll be glad to know the weapons won’t necessarily go with them. When Beyond Light releases, players can no longer access the exotic quests for Izanagi’s Burden, Legends of Acrius, Sleeper Simulant, the Ace of Spades and several others. Fortunately, Bungie has announced that the weapons will still be available via a Memory Kiosk in the tower. Details are still light at the moment on how players will obtain Destiny 2 weapons from the kiosk, and both the aforementioned The Anarchy and Tarrabah will be available from there. 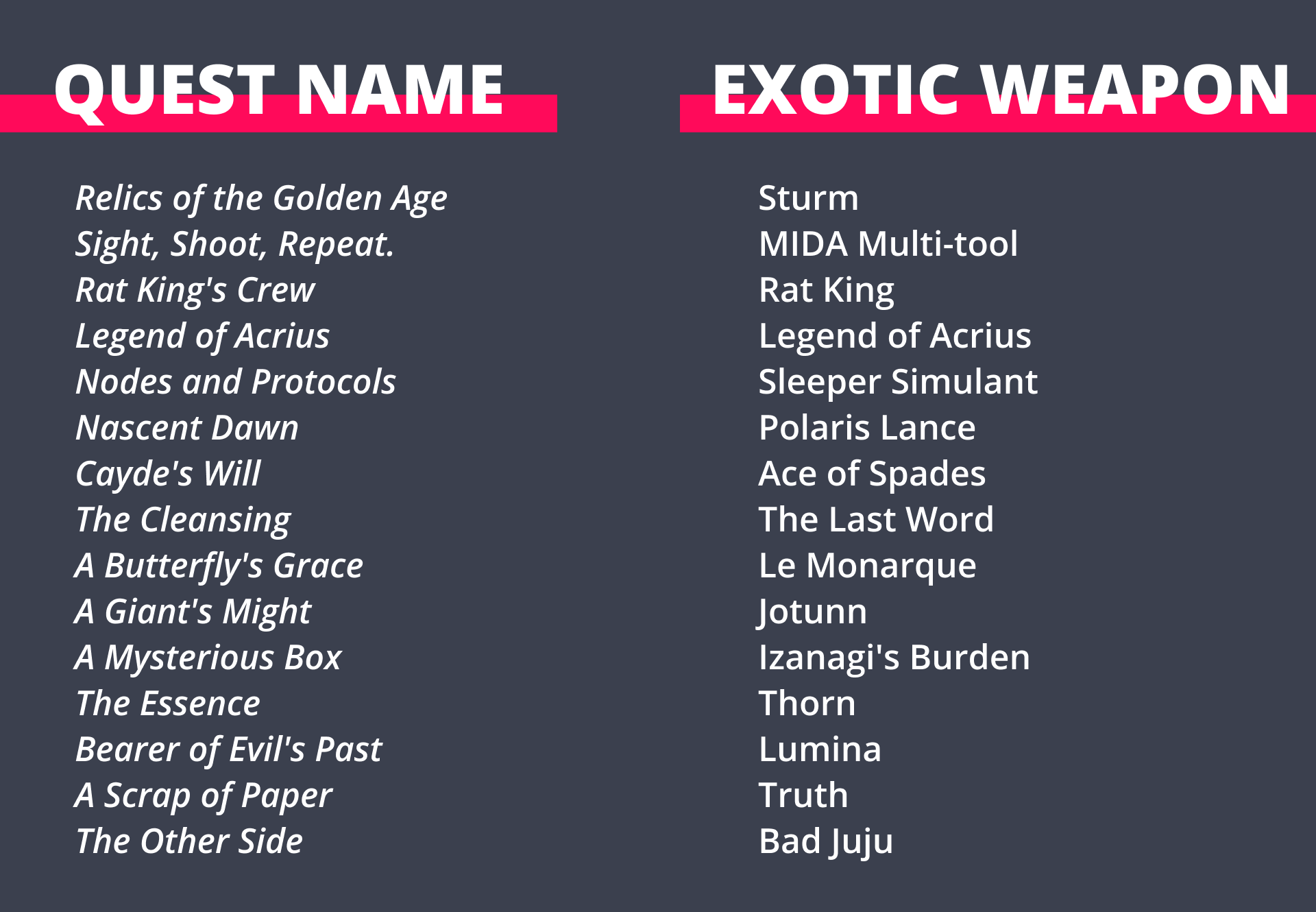 The Whisper - Whisper of the Worm

On November 10th, The Whisper activity and the Whisper of the Worm sniper rifle will no longer be available. The Whisper of the Worm has arguably been one of the most important weapons over the past two years, playing a regular part in raids and high-level encounter strategies. Its exclusion in Beyond Light will certainly create some interesting balance changes and new raid strategies, especially if players who already have the weapon aren’t able to further upgrade its light level.

The activity itself is a timed affair, taking players through an increasingly difficult set of jumping puzzles before a tough encounter at the end. This is one mission you’ll want to take a fireteam on, as the ending encounter will be difficult on your own. While it’s too late to earn the Whisper of the Worm catalyst, it’s still not too late to finish the activity and pick up the sniper rifle. Even without the catalyst it is still a solid sniper rifle as a result of its ability to refill the round upon three consecutive hits, making it an excellent choice for bosses with easy to hit critical spots.

The Zero Hour mission will also make its way into the vault on the 10th. Much like The Whisper, Zero Hour takes players through a number of difficult jumping puzzles as well as a number of difficult encounters. This is another activity that’s best played with a group of friends (or using a good old Destiny 2 LFG service) as it’s timed and the encounters are pretty demanding.

The Outbreak Perfected is probably one of the most unique weapons in the game, as critical hits and rapid hits from the weapon create tiny nanite swarms, which cause additional damage. Used in a fireteam or while raiding, the Outbreak Perfected can do some serious damage. It’s always great to see weapons with such unusual perks, so here’s hoping we see more in Beyond Light and beyond.

Unfortunately, a number of catalysts will also make their way into the vault from November, which means players can no longer use the best weapons in the game to their full advantage. The likes of Sleeper Simulant, Bad Juju and The Huckleberry and several others will no longer have catalyst quests available, massively affecting their viability in the meta. If you have the catalysts completed and equipped, they will remain in your inventory. If you are yet to start a catalyst or are part way through completing it, it will disappear from your inventory when Beyond Light releases - so now is the time to get them finished. For a full list of departing catalysts, please view the list below.

One of the most important catalysts going into the vault is undoubtedly Whisper of the Worm. The catalyst adds a perk called Whispered Breathing, which increases range and precision damage after a few moments of aiming down sights without firing. This is what made Whisper of the Worm so popular in high-end PvE encounters and with it now being power limited it’s unfortunately time for the player base to move on.

Another popular sniper rifle, Izanagi’s Burden will lose its catalyst as well. The catalyst provides an extra 20% damage buff on top of the rifle's ability to consume four rounds at once to create one high-damage shot. Izanagi’s Burden is a brilliant choice for elite enemies during raids for its ability to one-shot most enemies. While not as effective in boss encounters as the Whisper, Izanigi’s Burden is a very capable sniper rifle with the catalyst so it will be interesting to see how its usage changes from November onwards when the power limits start to take effect.

The Outbreak Perfected catalysts will also make their way into the vault alongside the pulse rifle when Beyond Light launches. The catalyst buffs the nanite damage and creates additional nanites from those attached to enemies when they die.

Bungie has stated that the catalysts will make their way back into the game, but is yet to provide any additional details. In the past, Bungie tied several catalysts to Faction Rallies, a season-long event in which players would pledge their allegiance to a faction. Each faction had a rank and the reward for maxing your allegiance, with each faction having a specific catalyst. This proved unpopular with players, as it meant obtaining each of the catalysts was a lengthy affair and should you be unable to play during that time you effectively missed out. We don’t imagine Bungie would bring catalysts back in this fashion, but who knows?

Feel we’re missing something? Disagree with something we’ve said? What are you most looking forward to in Beyond Light? Please let us know in the comments below.

The entire team at is looking forward to the launch of Beyond Light and we can’t wait to share more Destiny 2 news with you in the coming week. Looking to get the most of the soon-to-be-retired content? Why not play alongside one of Legionfarm’s pro players? Our friendly professional gamers will guide you through raids, help you get the best Crucible gear, run the game’s tough dungeons or complete those exotic quests you’ve had sitting in your inventory for months.

To find out more about how our pros can help you, please click the link below

See you in our next pieces and thanks for reading Legionfarm! 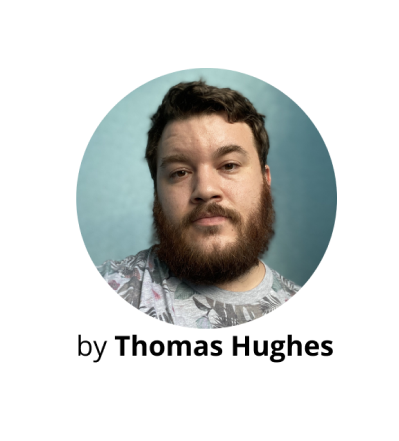