Rumors about TBC coming back have been circulating since last year, but they haven’t been confirmed until now. TBC will be released in 2021, and we can’t wait to play the famous expansion one more time. What’s it going to look like? When will it come out? Learn more details in our guide.

Let’s Welcome the New Expansion in World of Warcraft

Both veterans and new players are getting excited for the event that will take place in a month or two: The Burning Crusade beta is about to kick off. This was the first WoW’s expansion, and despite its imperfections, it is still remembered as one of the best DLCs in the game and a turning point for the whole WoW community. How and when will the launch of TBC go? Will the new WoW expansion be different from its original version? Let’s take a look at all the details we have right now.

We are all impatiently waiting for Burning Crusade, and even though it is supposed to come pretty soon, we still don’t have much info yet. Let’s review what we already know about the World of Warcraft TBC expansion and its release:

The Burning Crusade release date is still not announced. In this case, there are two dates that we should mark in our calendars: beta and official launch. Beta is likely to go live by the end of February, while the official launch will probably premiere sometime in spring.

There is not much World of Warcraft news on what the content in the next expansion is going to look like, so everything we can do right now is to just try to guess. Will there be old Burning Crusade bosses? Illidan Stormrage and Lord Kazzak are likely to come back since those are some of the main figures everyone remembers from the vanilla version. There is no info on the Burning Crusade dungeons, but those will probably stay the same. The same goes for other activities.

Burning Crusade won’t change much since the last time we played it. Of course, it’s going to be a bit different from what we remember: well, it’s been more than ten years, right? TBC will come back a bit reworked, but most of the activities will remain intact.

Burning Crusade arena, dungeons, and quests won’t change much; however, what is likely to change is the Drums of Battle item. There are still no details on what’s going to be reworked, but since this item is believed to be unnecessary and causing too much trouble, it might not become a part of the new expansion.

For more details on TBC, we’ll have to wait for Blizzcon 2021. It will take place next month, so before that, we can just try to remember how the release of the first expansion went. How did it go and why is this expansion so important? Let’s dive into nostalgia together.

Before WoW Classic Burning Crusade goes live, let’s look back at what it was like the first time around. TBC was a pioneer in all terms: WoW Burning Crusade introduced the community to raids, PvP activities, dungeons, Daily Quests, as well as many other things.

TBC was released in 2004, and since that time, the game has only been getting better. Was this expansion perfect? Not really. But was it a success? 100%! Without TBC, WoW wouldn’t have progressed as much as it did.

In the good old days, raiding was all about gathering a huge team of people who are ready to spend many hours in the game in order to beat the boss and get the reward. Burning Crusade changed it and gave players a new kind of experience. You could just log into the Ventrilo server with a team of 10 people and fight off bosses and hordes of enemies while having the right teammates by your side. It was a completely new feeling: to go into the Burning Crusade raids with a smaller group of players you can really trust and rely on.

TBC changed the game’s whole perception, making more people interested in it (even those who never liked gaming). We can say for sure that this expansion is the reason why WoW is still one of the most popular games these days. What else became a part of the massive update? Here is a quick review of all the new things that were added to the game after the release: 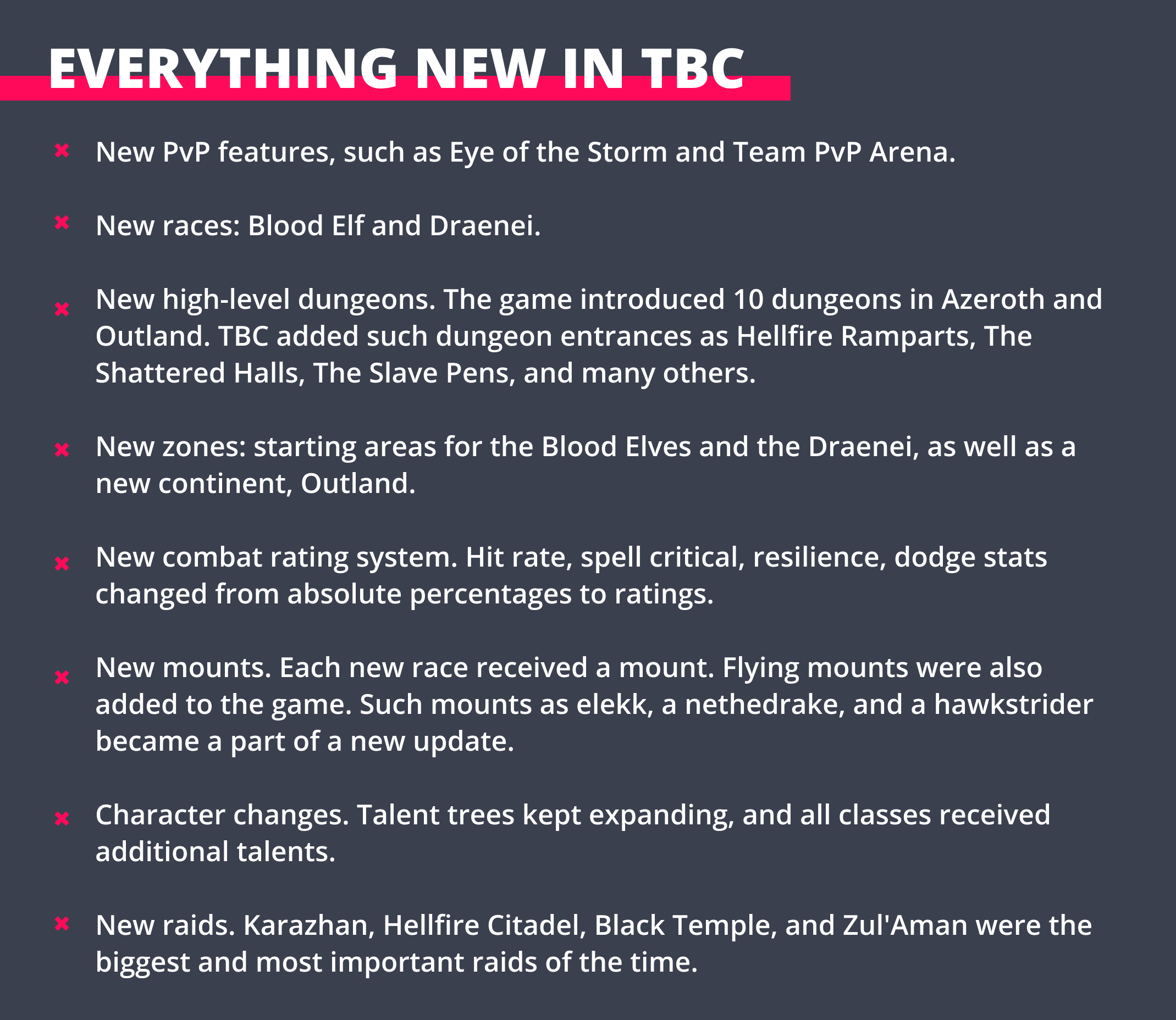 The fact that World of Warcraft Burning Crusade is making its way back to the game means only one thing: everyone will get to enjoy one of the best expansions once more! And if you want to make this experience as memorable and enjoyable as it can be, join our pro players on one of the game’s servers to start your first coaching session. Our pros will show you what it’s like to play on the highest levels and step up your game!

Our Pros Will Prep You for the Burning Crusade

How can you tackle all these challenges and World bosses when the next expansion comes out? With Legionfarm, you can take your WoW gaming experience to the next level. As you already know, every time a new expansion comes out, players get ready for new quests and raids, as well as tons of other PvP and PvE activities. If you want to avoid all the stress from trying to complete those challenges and reach level 70, our WoW LFG & carry service will be exactly what you need to handle the new expansion the right way.

Our Burning Crusade carry service has never been afraid of a good challenge, and even though TBC seems like quite a big one, it won't stay that way if you have people by your side that will help you get through it.

Here at , our pro players will teach you everything you need to know about the game. After a couple of Play with Pro sessions, you will feel much more confident when playing your favorite MMO. A few weeks of coaching are enough to change your playstyle completely, so nothing stops you from achieving your goals even right now. So, are you with us or not?

That said, are you guys ready for the launch? Is this going to be your first time playing the expansion? Tell us about your experiences and expectations in the comments down below, and don’t forget to come back to our blog for more articles on TBC and WoW!